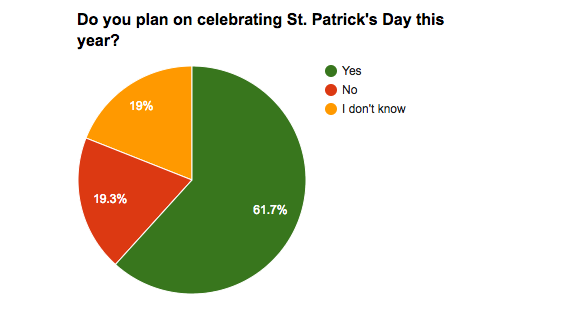 There are few certainties in life. Sure, we know “the house always wins,” the U.S. Postal service delivers despite rain, sleet, snow or hail, and that when snow is in the forecast, worried shoppers will run to the supermarket to buy bread and milk. Here in New Jersey, we can add one more certainty to that list: no matter what else is going on in the world around us, cities and towns across the state will “go green” and attract large crowds in celebration of St. Patrick’s Day.

With this in mind coupled with very specific Irish familial and business interests and an ongoing desire to use data as a means to inform our work, we set out to determine just how connected New Jersey is to Ireland, and how St. Patrick’s Day celebrations across our state inform and effect views of Ireland.  To that end, we conducted an online survey of 700 New Jersey adults.

According to Census data, an estimated 13% of all New Jerseyeans identify their ancestry as Irish.  In our survey, we found that just over 20% of respondents identified themselves as Irish-American (the proximity of St. Patrick’s Day and the way in which we asked the question likely explains the difference). This increased self-identification as Irish in the days leading up to St. Patrick’s Day also lends more credence to the belief that often times one’s connection to Ireland can be as much emotional as it is through actual ancestral and family ties.

Ireland also enjoys high popularity amongst New Jerseyans, with about three quarters (74%) of New Jersey adults reporting either a favorable or very favorable opinion of Ireland. St. Patrick’s Day celebrations in New Jersey similarly enjoy high marks, with roughly 70% saying that St. Patrick’s Day celebrations in their communities create either a positive or very positive impression of Ireland and Irish culture, showing that the holiday is an important platform for cultural and economic exchange and diplomacy.  This is crucially important to organizations, like Irish Network NJ, that strive to utilize connections to Ireland as a means to growing further economic and cultural links between the two nations.

While for many being “Irish” is about much more than just one day, or one month, out of the year, there is no doubt that whether it’s the travel industry, universities offering study abroad opportunities, or more general efforts to mobilize what has been termed the “Global Irish”, St. Patrick’s Day can and should be seen as an opportunity to increase outreach efforts.

While just about 38% of respondents reported awareness regarding efforts to engage Americans to invest in Ireland through business, educational opportunities or travel, nearly double the number were not. Given the aforementioned positive feeling towards Ireland, and an increased population that considers themselves Irish, if even only during this time of year, opportunities are plentiful to build on recent successes, which have seen record numbers of tourists visiting Ireland, and to entice more to choose Ireland for overseas studies.

Finally, over the years exceptionally strong bonds have been built between US and Irish business interests.  US companies seeking opportunities to expand globally have chosen overwhelmingly to grow through Ireland, creating approximately 150,000 jobs there.

Efforts by the Irish government to attract additional business investment are plentiful, and can, by any measure, be considered successful, but with 62% of respondents unaware of these efforts, strategies to dig deeper into the Irish American community would likely yield even more positive results.

Additionally, often lost in the discussion about overseas growth for US companies in Ireland, is the relative parity that exists between the jobs creation in Ireland, and that of Irish companies here in the US that currently employ 120,000 Americans in 2,600 locations spread out across all 50 states. This little known fact, when introduced through the survey, prompted 69% of respondents to report that they view Ireland even more favorably or much more favorably, and is an easy one to point to when speaking to policymakers or others with a more inwardly-focused approach to trade and business growth in the United States.

The bottom line is, as New Jersey and communities across the United States “go green” for St. Patrick’s Day, it is clear that Ireland and Irish Americans have an effective platform to inspire goodwill and further strengthen our trans-Atlantic partnership.

> For more details on the survey