Every year as September 11 approaches it seems that there is new footage from that terrible day. I am probably one of the few individuals from Northern New Jersey that, at the time, wasn’t personally connected to someone that was killed, and, away from home with limited access to regular news and internet, I was somewhat insulated from the initial bombardment of heartbreaking images in the hours and days that immediately followed.

However, each new video, photograph, or memory shared of that day brings it all back, reminders of those that lost their lives simply because they showed up for work. While a beautiful new building stands majestically in place of the Twin Towers, a symbol of victory over those that attacked us, there is no doubt that all of our lives changed in some way that day.

On this fourteenth anniversary of the 9/11 attacks I decided to start my day in the City of Paterson at their annual remembrance service. Similar in format to those happening across New Jersey, this one had special meaning to me because of the participation of the Paterson Fire Department, whose members I have been proud to work with as their union’s spokesperson, for more than 5 years. Miles away from the scene, many of these men that were on duty at the time, some finishing 24 hour shifts, suited back up and headed to the pile of debris where the Twin Towers stood just hours earlier. 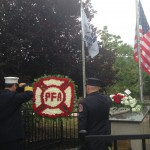 They share the story of so many other brave men and women, not just from the tri-state area, but across the country, that descended upon New York City to participate in recovery efforts. While hope diminished quickly of finding any survivors, many worked for weeks in efforts to recover what was left of the deceased, to offer families that lost loved ones some piece of mind, giving of themselves to help make broken families as whole as possible.

While always remembering those that were lost, it is these memories, the heroic actions of so many firefighters, police officers, and other courageous volunteers that stood together in the aftermath of the worst terrorist attack on American soil, that I choose to remember.