For much of the last week we have watched as law enforcement officials and the residents of Ferguson have literally stood against each other in a tense showdown, brought on not just by the tragic death of a teenager, but by what many feel is years, or decades, of divisiveness and will will. Perhaps what is most heartbreaking of all is that deep down the majority of both sides want the same thing, a stronger community where peace, justice, and equal rights for all prevails.

END_OF_DOCUMENT_TOKEN_TO_BE_REPLACED

Chivukula for Congress: A Team Campaign

Over the past few months, I had the honor of working with Assemblyman Upendra Chivukula’s Congressional campaign in the capacity of call time manager.

Assemblyman Chivukula is a serious legislator committed to his constituents. As an electrical engineer and a progressive, he offers a much-needed perspective that would have served NJ-12 well in Congress. Unfortunately, while the election did not end in our favor on June 2, I am proud of the work we accomplished for Chivukula for Congress. With only three months available to us, we exceeded fundraising expectations and raised more than $350,000 in contributions.

END_OF_DOCUMENT_TOKEN_TO_BE_REPLACED

While we are serious in our efforts to provide the very best service to each our clients- we certainly have no time for “all work and no play” here at Lenox Consulting, and we gladly admit that sometimes it seems like what we do is too much fun to be called “work”!

END_OF_DOCUMENT_TOKEN_TO_BE_REPLACED 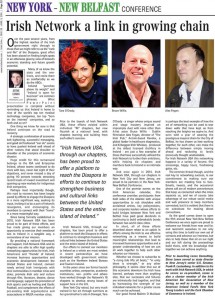 Founder Steve Lenox moderated this year’s New York – New Belfast Conference, an event bridging the citizens of the two cities, and was featured in the latest edition of the Irish Echo.