In his 1956 “Profiles in Courage” John F. Kennedy, then himself a United States Senator, introduced readers to eight former members of that very exclusive club that put service over self-preservation, and sound public policy over political expediency. For many, the book and the similar recognition that others have received since, serves as a battle cry for the need to find candidates and elected officials that transcend the role of politician, and through their unyielding commitment to doing what is right, earn the title of statesman.

Despite his admonishment that “it is when the politician loves neither the public good nor himself, or when his love for himself is limited and is satisfied by the trappings of office, that the public interest is badly served,” voters, often times shockingly unaware that they can and should demand more of those in office, continue to pull the lever for candidates whose actions once elected aren’t always driven by their convictions.

Thankfully, for those us that believe that politics can still be an honorable career, and that a well run government is the best way to lift our communities, there are plenty of candidates, and those serving, who will consistently put the needs of their constituents, above their desire to hold a title. In short, they embody the courage President Kennedy admired so much. It’s with this sort of candidate in mind that I was particularly proud to get the charge from a client to help organize an endorsement event for Joe Cryan in his race for State Senate in New Jersey’s 20th Legislative District.

Cryan, currently serving as Union County Sheriff, formerly served as a Member, and the Majority Leader of, the New Jersey General Assembly. His resume also includes an impressive stint as Chairman of the New Jersey Democratic State Committee from 2006-2010. It was in both of these positions that Cryan showed his willingness to stand strong in the face of powerful opposition, without regard to the potential damage to his standing under Trenton’s Golden Dome.

Most notably, when, at the height of his popularity, Governor Chris Christie launched a multi-pronged attack on public workers, those that make New Jersey’s communities work, then Assemblyman Joe Cryan stood his ground. While an inexplicable number of his colleagues charged head on alongside Governor Christie, and cast local heroes as enemies to efforts to reform pensions and healthcare, Joe Cryan used his voice to protect the retirement security of teachers, police officers, and firefighters. Knowing his solidarity would likely cost him his Leadership position, and make his role as Chairman untenable, Joe Cryan never wavered. 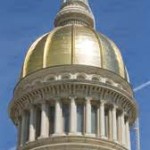 With firefighters, police officers and teachers supporting his campaign, Joe Cryan will receive a hero’s welcome when he returns to the Statehouse in 2018.

History, as we now know it, shows that those reforms did nothing to right our State’s financial standing, and that Christie’s agenda had nothing to do with making New Jersey stronger, but rather served only his own ambition to ascend to the Presidency. As Cryan’s campaign to serve in the State Senate in his old district progresses, those same firefighters, as witnessed at the endorsement event, as well as teachers and police, are visibly standing by his side, just as he stood by theirs.

While his actions may have cost him at the time, his relentless desire to do what was right, simply for the sake of doing the right thing, is a badge of courage he will carry with him when he enters the New Jersey Statehouse again in January, 2018.