While not clear if it’s out of general interest, to make polite conversation, or born from an immense fear of such an event coming to pass, there is no doubt that the question I have been asked most in recent days isn’t “What did Santa leave you?” but rather “Can Donald Trump really become President?” As those participating in the conversation further consider Trump’s platform the line of questioning invariably turns to “what is wrong with America?”

In terms of his ability to win, Tom Jensen, Director, Public Policy Polling, said it best, “I don’t think there’s any way to know for sure until we actually start doing some voting!” But despite continuing to maintain his status as frontrunner, I am confident that we need not fear either Donald Trump taking up residency in the White House, or that America in general, is in as great a state of peril as indicated support for his candidacy might suggest.

No one, perhaps not even Trump himself, knows for sure what his intentions were when he entered this race, and for sure it will end unsuccessfully, at least as it relates to winning the ultimate prize. By dominating the media coverage surrounding it however, he has certainly filled his insatiable taste for attention.

Every election I have been involved in has been described as “the most important” in our lifetime, sure to bring with it sweeping changes that will drastically effect our day to day lives, and long term success as a nation. Yet for most, it’s hard to tell much difference from one Administration to the next. What does seem a constant, however, is the inability for most lawmakers to rise above partisan politics, bring forth worthwhile policy ideas, or effectuate any meaningful change, and the negative feelings this conjures up about them from the public.

So, despite his outlandish ideas, hateful rhetoric and bombastic personality, is it any wonder that a man who has successfully navigated the highest echelons of corporate America as well as the WWE, and whose holdings have included luxury high rises, casinos and office buildings as well as the most recognized beauty pageants, has once again captured the imagination of Americans across the country?

Since entering the race, and throughout his public life, Donald Trump has deftly found ways to flaunt his billionaire lifestyle while also connecting with the masses residing on Main Street USA. If we are to believe the whole world is a stage, Trump has found ways time and time again to steal the spotlight, this quixotic race to serve in the most powerful position on the planet being his command performance.

Donald Trump is indeed a master showman, undoubtedly benefiting from 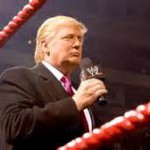 the “born every minute” types that have yet to seriously contemplate what Trump is really saying. Some of those supporters might never wake up to reality, but most others will, especially as they continue to see that there are alternatives. Of course, those alternatives are perhaps more frightening than Donald Trump.

Through all of this, I have no doubt that these questions will continue to come, at least for the next few weeks, and, with an end in sight, I welcome them. More than these though, I look forward to next year’s questions, and drastically changed tone, as they relate to President Obama turning over the keys to the White House to his successor, whomever he, or she, may be.