Staying for the Mission

When the Vice President of the United States, the Taoiseach, and a former President of Ireland are among your guests at the gala dinner, and it’s not the biggest highlight of the conference, you can be confident that you succeeded in putting together a truly memorable agenda. 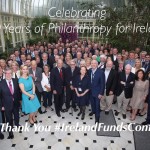 Set against the backdrop of the centenary of the 1916 Rising, the event that ultimately led to Ireland’s independence, and on the occasion of their 40th anniversary Worldwide Conference in Dublin, The Ireland Funds did just that!

While there was no shortage of business networking opportunities, and socializing well into the night, and in some cases early morning, those that gathered from every corner of the globe did so with the intention of forwarding the mission of the Ireland Fund at the forefront of their minds.

At its core, the mission of The Ireland Funds is simple: to support programs of peace and reconciliation, arts and culture, and education and community development throughout the island of Ireland. With over $500 million raised, and more than 3,000 organizations supported, the success is unquestionable.

With such tremendous accomplishments under their belts, the Ireland Fund would be perfectly entitled to simply celebrate their success. But for the leaders gathered in Dublin, it simply isn’t enough.

The foundation that “Global Irish” icons Dan Rooney and Tony O’Reilly laid forty years ago has grown into an iconic monument to philanthropy, poised to continue its outstanding work into the next forty years, and beyond. After playing her own legendary role as Chair, Loretta Brennan Glucksman, a role model to so many, handed the reins over to John Fitzpatrick, a true gentleman who continues to inspire many of us to do even more to help others.

A rolodex made of up exclusively of the contact information for The Ireland Funds’ Boards of Directors would be the envy of anyone who considers networking a sport. Combined with the day to day stewardship of a staff whose commitment, integrity, and ability is unmatched, the Ireland Fund is surely on a course to do even more good.

However, as we were reminded regularly over the course of the weekend, it’s the donors that really steer the ship. While there are many benefits to getting involved, and giving, to the Ireland Fund, the real return on the investment we make is the ability to reach out and support a wide range of organizations that are creating meaningful change all throughout Ireland. Whether it’s giving unrestricted funds, or through a donor-advised grant, donors that support the Ireland Fund can rest easy with the knowledge that their own hard earned dollars are being put to work appropriately and efficiently. Transparency is at the very core of The Ireland Funds’ efforts to lead philanthropic efforts in Ireland and among the “Global Irish” into the future.

In addition to their fundraising efforts and subsequent giving, The Ireland Funds has also taken on the tremendous task of creating a greater awareness of what philanthropy is, and creating a culture where philanthropic efforts are the norm. Giving back, whether it’s to community, fraternal or other organizations, is an important part of attaining financial freedom as we progress in our lives and careers, but doing so with a plan in mind makes an even greater impact. When one can match that giving plan to a passion, such as The Ireland Fund has for decades for the “Global Irish” around the world, donors transform into philanthropists.

I have been proud to play a small role in The Ireland Funds as a Young Leader, and look forward to helping to advance the Global Leadership Network which will ultimately develop the next generation of the organization’s leadership and help direct its course through the next phase of success.

Having had the chance to meet, and develop meaningful relationships with outstanding organizations such as the Abbey Theatre, Social Entrepreneurs Ireland, and the Little Museum of Dublin, and learning so much about so many more, my only regret is that that I don’t have even more to give. I know, however, that as my ability to give becomes greater, and I continue to develop and execute my own philanthropic plan to help build stronger communities, The Ireland Fund will be an important part of that.