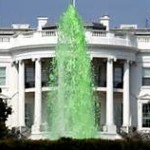 With fountains going green, the unmistakable sound of feet stomping on marble floors in traditional rhythm, and tables full of Emerald Isle sourced bread, cheese, seafood, and yes, whiskey, for a few hours each year the White House is transformed into the greatest celebration of Irish culture to be found anywhere the Global Irish have trod.

While the delivery of a bowl of shamrocks and the inherent goofiness of such a stereotypical event may seem to be lacking any true meaning, the value of the annual invitation by the White House to the Irish government is not one to be taken lightly. 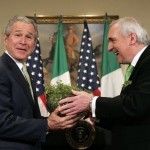 Calls for Taoiseach Enda Kenny to break tradition and reject President Trump’s overture are wrong-headed. His acceptance in no way signals an adherence to, or support of, the misguided policies Trump espoused on the campaign trail, or, more alarmingly has already pursued in the early days of his Administration. Instead, it is the opportunity, unavailable to any other world leader, to articulate the values of his nation in the most followed arena of world politics year in and year out.

This past weekend’s enactment of a Muslim ban, and the continuing assault Trump’s White House is likely to inflict on immigrants all across the United States, is a matter of great policy importance to the Irish government. Instead of speaking about the issue from 3,000 miles away, Taoiseach Kenny will have an opportunity to lend his voice to the estimated 50,000 undocumented Irish that call the United States home. Given the chance, he certainly owes it to them to make a face-to-face appeal to President Trump for fairness in dealing with the reality that most have settled here for decades, been contributing members to our communities, and made homes for themselves and their families within our borders.

President Trump’s strong calls for tax reform, and the dubious arguments some have made regarding Ireland’s role as a tax haven must also be confronted head on. The reality is that the economic relationship that exists between the United States and Ireland is a great two way street. According to the American Chamber of Commerce Ireland, while 150,000 people are employed by US firms in Ireland, Irish companies employ 120,000 workers in 2600 locations, in all 50 states across the US. In the wake of the recent Apple court ruling and in anticipation of the impact of Brexit, making a strong case for Ireland as a strategic location for US companies to continue growing globally is critical.

Ireland and the US have long enjoyed a special relationship, and this annual date on the calendar is part of that. As efforts continue to engage the 40 million strong members of the Global Irish community across the United States, and while Ireland’s success at harnessing goodwill from its Diaspora globally plays hugely into the small island’s ability to punch above its weight both from a business perspective and culturally, Taoiseach Kenny’s ability to connect face-to-face with President Trump has the ability to make a huge impact on the Administration’s global outlook.