Steve Lenox, President, Lenox Consulting, was proud to speak at a Congressional briefing on Irish America – following is a review he prepared on the event: 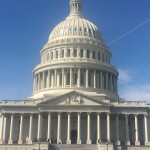 Just hours before President Trump delivered his first address to a joint session of Congress, efforts were underway on Capitol Hill to raise awareness of issues important to the Global Irish community across the US. Billed as a Congressional briefing, the event, was hosted by the Council for American Ireland Relations (CAIR), a non-profit, non-partisan organization, launched to educate US lawmakers, and insure that the voice of Irish America is not lost in the legislative and policymaking process.

Following a warm Irish welcome by Congressman Brendan Boyle, Michael Carroll, Chairman, thanked the nearly twenty legisaltive staff and other guests for attending, reminding them that the mission of CAIR is to “be a resource to your office, not just in the days leading up to St. Patrick’s Day, but throughout the year.”

While panelists Denis Staunton, London Editor, The Irish Times; Brian O’Dwyer, Chairman, Emerald Isle Immigration Center; and Steve Lenox, President, Irish Network USA offered their insights on issues such as the potential political and economic impact of Brexit, immigration reform, and the continuing growth of business links between the US and Ireland, the attendance of other notable leaders such as Stella O’Leary, President, Irish American Democrats; Claire Rumpsa, Director of Leadership Programs, Washington Ireland Program; and Terry Riley, President, AOH Herbert-Cady Division, was a strong reminder of the depth of leadership that currently exists within the Irish American community.

Acknowledging the attendance of Representative Joe Crowley, Chairman, House Democratic Caucus, and Representative Kathleen Rice, and thanking them for their leadership, O’Dwyer stated that “the Irish have always held a special place on Capitol Hill, and at all levels of government throughout our nation’s history.” Sharing his extensive knowledge on efforts towards immigration reform, including in his role as Founder of the Emerald Isle Immigration Center, O’Dwyer continued “the unpredictability of the Trump Adminstration makes it more critical than ever that we look out for the rights of the Irish that have made their homes in communities across the nation.” O’Dwyer estimated that the number of undocumented Irish living in the US to be close to 100,000.

Steve Lenox, President, Irish Network USA, reminded those in attendance that “with nearly 40 million people in the US claiming Irish heritage, the reality is that every member of Congress has at least a piece of this key demographic in their district.” As a dual citizen , and dual resident of the US and Ireland, Lenox shared his unique experiences raising his children between the two countries, as well as traveling throughout the US speaking to Irish communities and concluded that “for many St. Patrick’s Day is about much more than soda bread and green beer, and through CAIR we want to make sure your Members are prepared to answer the questions that are truly indicative of the unique relationship between Ireland and the United States.”

“This was an important, timely briefing as Congress debates immigration and many other issues of concern for Irish Americans,” stated Michael Maitland, Chief of Staff, Office of Representative Donald Norcross. “Especially now, the United States can only benefit from embracing our Irish American neighbors and strengthening ties with our Irish cousins.”