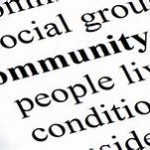 As I racked up the miles last week, switching between planes, trains and automobiles, flying across the Atlantic, driving the length of the Garden State Parkway, and riding the rails to Baltimore, I found “community” to be a recurring theme through many of the conversations and events that filled my schedule.

Still recovering from my attendance at the Cork Chamber of Commerce’s Awards Dinner, I spent much of the first two days of the week considering the tremendous accomplishments of the business “community” in the other place I call home. From large multinationals like Apple and Dell, to startups like OrthoXel and VConnecta both already charting great paths to success; the upcoming introduction of transatlantic flights and efforts to improve roads infrastructure; and the opening of Republic of Work, an innovative workspace designed to usher in the “future of work” through collaboration and cross pollination of ideas; there is no doubting that the best days are ahead for Ireland’s second largest city. The idea of “community” also extends to efforts through Connecting Cork to engage the Global Irish, those that have made lives all across the around the world, but still consider Cork to be their home.

Fresh off my regular flight from Shannon to Newark, and perhaps a bit blurry-eyed, I found myself at a diner discussing changes to the “community” my friends and clients of the Jersey City Police Benevolence Association (JCPOBA) have witnessed through the decades. Over tuna melts, omelets, and other delicacies only found in New Jersey diners, I was regaled with stories of a past where the block you called home was all that really mattered, for everything you needed was within a stone’s throw. In many ways the neighborhood you grew up in determined where you were going, and your worldview rarely extended much beyond the reach of your local church. Now, as leaders in the law enforcement “community”, they, like their colleagues on the job with them, move deftly from neighborhood to neighborhood, holding deep appreciation for the past they knew, with an unyielding commitment to make the future one of safety for all they have taken an oath to protect.

Traveling on to Atlantic City for the NJFMBA’s annual education conference, I was immediately enveloped in another tight knit “community”, again, one not defined by geographical boundaries, but by profession. Similar to their brothers in blue, firefighters face inherent risk on the job, heading towards dangerous situations every day that most are running from, likely on their worst days. The agenda, full of lessons on leadership, trainings mitigating the effects of long-term exposures to harmful toxins, and reminders of the supports that exist for to manage the stresses of the job, was another eye opening reminder that for so many, the flames they fight are only a small part of the hazards they face. As the discussions continued, whether from behind a podium or around a table enjoying a meal together, the reliance they place on their “community” for support was very apparent.

Finally, closing the week with a quick trip to Baltimore to attend the Democratic National Committee’s Future Forum, the calls from various candidates to build the Party from the “community” level were nearly deafening. With candidates for Chair coming from a variety of backgrounds, the eventual winner will be tasked with rebuilding a massive organization that at its core is tasked with championing values and electing candidates so diverse and, at times, divergent, that success, for all but the most skilled of diplomats, negotiators and leaders, can be fairly characterized as impossible! The Democratic Party indeed casts a wide net, and bringing “communities” together will be the key to success if the disastrous elections of 2016 are to be avenged.

A quick online search for the definition of “community” shows its meanings to be as wide-ranging as the experiences I had in the past days, and indeed navigating the various events, personalities, discussions and challenges I was confronted with made it another week in which I was thankful to have the opportunity to provide my services to such a diverse array of clients!